Cleaner air for a better life

The quality of the air we breathe is important for our health. Cars, homes, factories, farms and natural sources can all release pollutants into the air and worsen the air quality. Most of the world’s population lives in places where the air quality does not meet the guidelines set by the World Health Organization (WHO), and air pollution is considered to be one of the largest environmental health risks in Europe.

Here, we look at the causes of air pollution, how it can affect our health, and what we can do to contribute to cleaner air.

Air pollution is particularly troublesome in cities and urban areas, but is also present in rural areas and regions closer to deserts. It has no boundaries: pollutants released in one area can be transported through the air and have an impact even in far-away places.

The principal source of nitrogen oxides is road transport (such as cars and trucks). Sulfur dioxide mainly comes from the production and use of energy for factories, buildings and homes, especially for heating and cooling. Particulate matter, which refers to tiny particles in the air, mainly stems from industrial activities and road transport, but also from natural sources, such as deserts and volcano eruptions. Airplanes, ships and landfills are also responsible for air pollution.

Besides these, there are also natural sources of air pollution, such as sand and dust from deserts, ash from forest fires and volcanoes, and sea salt transported by the wind.

Nevertheless, it is important to distinguish air pollutants that are toxic for human health from the greenhouse gases found naturally or released by humans into the atmosphere. These gases (including water vapour, carbon dioxide and methane) trap heat from the sun and increase the planet’s temperature, leading to global warming.

How does air pollution affect our health?

The effects of air pollutants on our health depend on how long we are exposed, to what pollutants, and their concentration level in the air. With short-term exposure, air pollutants can irritate our eyes, nose, throat and skin, and cause allergies, asthma attacks and respiratory infections. In the long term, they can affect our lung and heart function, causing strokes, heart diseases and lung cancer. It is estimated that air pollution is responsible for over 4 million premature deaths per year, according to WHO and recent studies. Air pollution can impact sensitive groups the most, including children, older people and those with respiratory or heart diseases.

Everyone can contribute to cleaner air and protect their health by making small changes in their daily life. You can walk, cycle and use public transportation instead of using a car, especially when travelling short distances. Using less-polluting electric/hybrid cars, avoiding idling by turning off the car engine when not in use and ensuring that your car is maintained properly can help reduce pollution from car fumes.

At home, you can contribute to cleaner air by using more energy-efficient appliances, using less electricity for heating or cooling, and choosing locally sourced produce to reduce pollution from goods transport.

Finally, it is important to stay informed about the causes of air pollution and regularly check the air quality levels in your area. This can help you make decisions to protect your health, like avoiding busy roads or not exercising outside on high pollution days. There are many sources of information, both websites and apps that are available to citizens and provide air quality forecasts, but also near real-time measurements of air pollution.

At GreenSCENT, we are working on creating a set of digital tools that can help raise awareness on various environmental issues, among which is air quality, and empower students, youth and citizens to be more informed and take action for a better future. 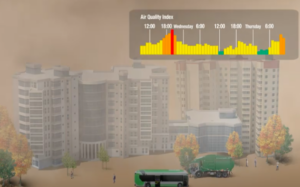 Cleaner air for a better life