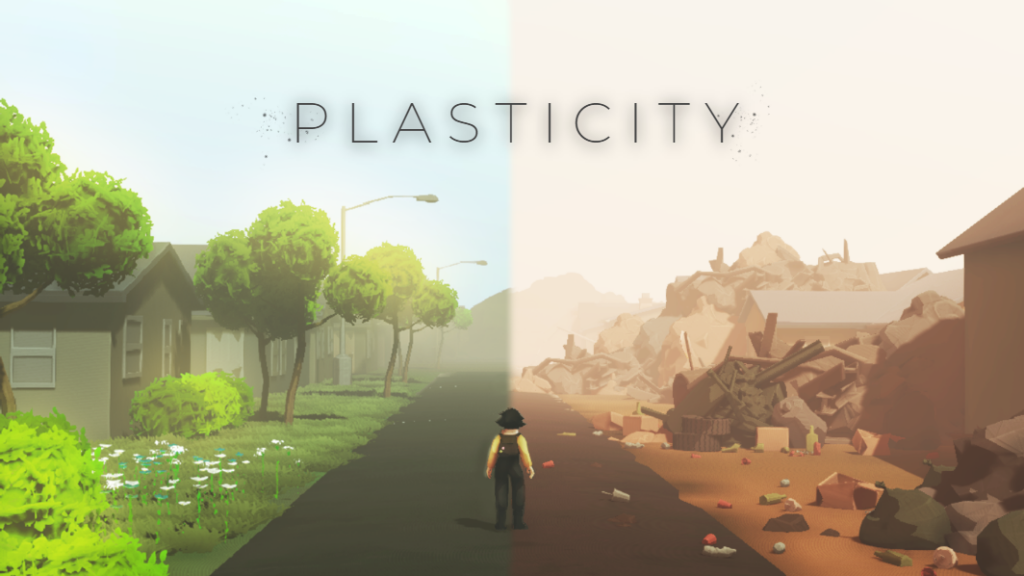 Green and polluted worlds side by side in Plasticity. Photograph: Plasticity Games.

Plasticity is a single player puzzle-platformer video game developed by thirty students in the USC Games Program at the University of Southern California (USC) and released in 2019. Consisting of around thirty minutes of play, it is available for free download for PC on Steam. It was nominated as the best student game in the 2020 Games for Change Awards and it was officially selected for the indie game booth at the 2020 Game Developers Conference (GDC). Set in 2140, Plasticity takes place in a plastic-polluted world. The player explores the world through the eyes of Noa, a young girl that leaves her home to find a better place to live. Through simple mechanics, the player chooses to clean up litter, help birds trapped in plastic nets, and collaborate with other characters to make the world a little greener. Gameplay is accompanied by subtitles that convey Noa’s reflections about the urgent need of stopping plastic consumption to avoid a future like the one in Plasticity.

Using simple in-game actions, Plasticity aims to raise awareness of plastic consumption and its environmental impact. The player has to constantly choose if and how to improve the world Noa lives in. Some examples? Here they are 🙂. The player encounters some birds caught in a plastic net when walking through a park. Then, they must decide whether to release them or continue walking. Other choices include throwing trash in a bin or on the ground, or freeing a dog with a bucket stuck on his head or ignoring him. The consequences of the player’s decisions become apparent towards the end of the game, when they visualise if they managed to clean the city or if they will continue living in a dirty one. In fact, decisions made in the game reflect those in the real world.

Player’s agency is central in the video game. The game demonstrates through the challenges that every action has a consequence and that making conscious efforts is required to live a sustainable life. Several quotes in the game incentivise people to think about the long-term consequences of environmental issues. As a result, the video game encourages players to shift from “individual actions for myself” to “individual actions for myself and future generations”.

Available only in English, Plasticity does not require sound to play. Music and sound effects add to the immersion, and Noa’s reflections are subtitled in white against a black background. Sentences are  short, but text size and font cannot be adjusted, making it difficult to read for players with visual or cognitive disabilities. Controllers are displayed on the screen at the beginning of the game, but no further information is provided other than the keyboard arrows are used to move and the control key to interact with objects. Together with the lack of instructions or tutorials, it may be difficult for players to decide which action is needed to progress in the game. Controllers cannot be remapped, an accessibility barrier for players with motor disabilities. Visual accessibility is nonexistent, as sound cues are not specific enough to progress in the game. Likewise, having access to the in-game text through a screen reader does not contribute to advancing in the game, as Noa only provides background information about the Plasticity’s world, but not how to navigate it. Finally, the user interface is uncluttered, but the main character’s outline may blend with the background, as the colour palette does not provide a high contrast.

Plasticity is a short game designed to raise awareness of the long-term damage caused by single-use plastics. Players’ agency is central to the game because they can transform a polluted city into a cleaner one through their in-game actions, providing (or not) a new environment for themselves and future generations to live in. However, the ability to express agency and comprehend the context is not accessible to everyone. The game’s potential educational impact is diminished by the game’s accessibility barriers, which prevent everyone from playing, particularly people with visual, cognitive, and motor disabilities.

In summary, here are the pros and cons of environmental awareness and accessibility:

PROS: Players’ agency is crucial: through their in-game actions, they can transform the city into a clean one or a dirty and polluted one. Reflections on the effects of environmental issues on future generations enabled reflections on the long-term effects of climate change. It’s a free video game!

Intuition is key on the video game, but lack of clear instruction can compromise full understanding

PROS: Game design contributes to cognitive and hearing accessibility, as access to sound and text are not required to progress in the game.

CONS: There are no accessibility options. Visual and motor accessibility is lacking, and as interactive objects are not signalled, players may miss key game actions.

Scroll to top
Manage Cookie Consent
To provide the best experiences, we use technologies like cookies to store and/or access device information. Consenting to these technologies will allow us to process data such as browsing behavior or unique IDs on this site. Not consenting or withdrawing consent, may adversely affect certain features and functions.
Manage options Manage services Manage vendors Read more about these purposes
View preferences
{title} {title} {title}